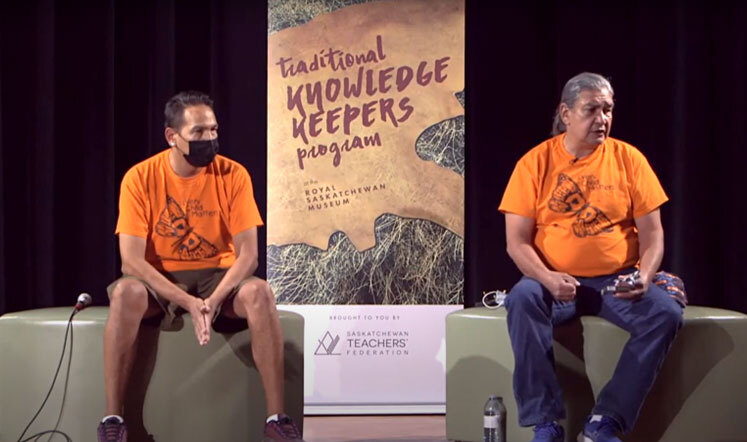 Join Brad Bellegarde and Life Speaker and Residential School survivor, Tim Poitras, in conversation about the legacy of Residential Schools. Including musical performances by InfoRed. Pre-registration is appreciated. Ages 12+.

Brad Bellegarde is a proud Nakota/Cree member of the Little Black Bear First Nation who calls Regina home. He is a nationally published journalist having written articles featured in the Globe and Mail, Toronto Star, Ottawa Citizen, Huffington Post and CBC. Also known as InfoRed, he is a nationally recognized Hip Hop artist having performed live on national television as well as in Vancouver for the 2009 Cultural Olympiad. Brad is a CBC Future 40 Award Winner, Neechie Gear Role Model and recent recipient of the Queen Elizabeth II Platinum Jubilee Medal. A true believer that education is the new Buffalo, his work in schools gave him a unique opportunity to present his methods of education at the VIII International Conference of Intercultural Education in Indigenous Contexts in Temuco, Chile.

Tim Poitras is a member of Muscowpetung First Nation and resides on reserve. Tim is Lakota/Dakota and is enriched with the ceremonial customs and traditions. A widower of his late wife of 35 beautiful years, together they have two sons, ten grandchildren and three great grandchildren. Tim lives a sober lifestyle and is a Residential School survivor. Tim is entrusted to serve his Lakota Oyátē (people) as Sundance Chief for the past 30 years. Tim has taken the time to learn and earn the Seven Sacred Rites of the Lakota as a Lakota/Dakota man. Tim successfully completed his Diploma in Business Administration from SIIT in Regina, SK. His passion is to practice his traditional lifestyle and provide ceremonial guidance of his enriched Lakota culture. He continues his teachings through community engagement by facilitating traditional life skills. Tim has travelled across the nation and south of the Medicine Line to share his ancestral knowledge. He is a funny and honest man who uses his life story and experiences through his teachings.